Breaking news this morning from the physicians at UCMC shows that Damar Hamlin is awake and speaking, and, most importantly, his neurological function appears to have remained intact. UCMC staff also broke the news that Hamlin is now breathing on his own, and no longer needs the assistance of oxygen and breathing tubes.

Fears grew that Hamlin’s neurological function would be permanently impaired after news broke that Hamlin would need CPR for nearly ten minutes following his collapse on the field during a Monday night primetime match-up between the Buffalo Bills and Cincinnati Bengals.

Following similar a post-injury response that Tua Tagovailoa would have following his concussion, where he also stood up and moved before falling back to the ground, many viewers didn’t immediately comprehend that Hamlin’s collapse wasn’t only a dangerous head hit, but that a 24-year-old man was fighting for his life and needed to have his heart restarted.

In the days following Hamlin’s injury on the field, every NFL team along with the NFL’s Twitter changed their profile picture to a photo edit of Hamlin’s #3 jersey, reading: 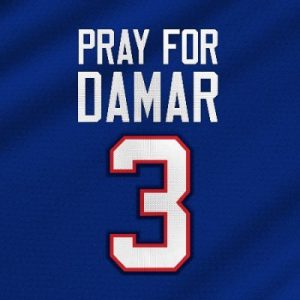 Players and fans alike also took to prayer following his collapse and initial reporting that the 24-year-old rookie was rushed to the hospital and was fighting for his life. While this has been considered to be less T.V. friendly in recent years, even NFL announcers and commentators skipped over saying “thoughts and prayers,” simply instructing their viewers to “say a prayer for Damar Hamlin.”

Continuing to send all of our love, prayers and support to you, Damar. ❤️💙 pic.twitter.com/yNswRCflpQ

Alongside the endless prayers that Hamlin received, many wanted to also look into which member of the medical staff did the impossible for Hamlin, and the majority of the credit for his on-the-field response is being given to both Nate Breske and Denny Kellington for their on the field response.

His speed and skill were "absolutely vital," per @AlbertBreer. pic.twitter.com/0LmD9GAtsI

While giving an update on the status of Damar Hamlin, doctors at UC Medical also wanted to give credit for their on-the-field response to the Bills medical staff:

The quick response by the Bills training staff and medical personnel on the field, NOT only saved Damar Hamlin's life, but also saved his neurological function. pic.twitter.com/4PB8AlbG6R

Amid concerns that Buffalo Bills’ Safety Damar Hamlin could lose his life as a result of an injury he sustained on Monday Night Football in a game against the Cincinnati Bengals, breaking reports are showing that Hamlin is awake in the hospital and holding hands with his family. The reporting from Hamlin’s agent and family also states that he appears ‘neurologically intact’ after needing to undergo CPR for nearly 10 minutes and have his heart reset by use of an AED after collapsing after a routine play.

Hamlin’s ability to wake up following the surgeries he had to undergo at the University of Cincinnati Medical Center following going into cardiac arrest, and show signs that his neurological status is trending in a direction indicating “remarkable improvement” could be a sign that Hamlin may have avoided the worst.

This story is still ongoing, and we will release updates when new information is available.

Buffalo Bills safety Damar Hamlin collapsed on the field in a game on Monday night against the Cincinnati Bengals after taking a shot to the chest from an opposing player. Hamlin suffered cardiac arrest and Bills staff say his “heartbeat was restored on the field and he was transferred to the UC Medical Center for further testing and treatment.” He is currently sedated and listed in critical condition,” they added.

A message from Hamlin’s agent Ira Turner read, “Please continue to pray for Damar and his family. We currently have no update at this time. Will ask that you keep the family in your prayers.“

The Bills team have already flown home to Buffalo while some have decided to stay behind to show support for their teammate. Hundreds of fans also made the trek from the Bengals stadium to the hospital in order to offer prayers for Hamlin’s recovery.

This morning, Dr. Sanjay Gupta, CNN’s chief medical correspondent, said “Just the time is of such critical importance here in terms of taking care of someone like this. The response from the medical team was fast and seconds and minutes matter in a situation like this,” adding, that it was crucial to restart Hamlin’s heart in the timely manner that the medical personnel were able to do following Hamlin’s collapse, adding “the process of normal pumping,” which Dr. Gupta is assuming happened can be viewed as “an optimistic sign.”

Hamlin’s marketing representative also shared an update on his Twitter, writing, “Update on Damar: His vitals are back to normal and they have put him to sleep to put a breathing tube down his throat. They are currently running tests. We will provide updates as we have them.”

I make over thirty k a month working part-time.. d10 I kept hearing from other people telling me how much money they could make online, so I decided to find out. hjk Well, it was all true and it completely changed my life.
…
This is where I started.….handsomeincome6.pages.dev