Over 100 Hollywood heavyweights petitioned NBC to move Trump’s Town Hall to before or after Biden’s hour on ABC, for the “political health of our democracy.”

The letter accused the network of “doing a disservice to the American public” by counter-programming Biden’s Town Hall, because the President “refused to participate in the virtual debate” that had been scheduled to air.

Here are the liberal celebs that think they’re not making “a partisan issue” by signing.

Parks and Recreations actress Aubrey Plaza wants to moderate the next debate.

Please let me moderate the next debate ? pic.twitter.com/hSMYS69Ob9

Zoolander star Ben Stiller once called Trump “the villain in a ‘Naked Gun’ movie or something.”

A Wrinkle in Time director Ava DuVernay replied to the President’s Walter Reed release tweet with: “This man is evil.”

“Don’t be afraid of Covid” he dares say to those of us who have lost loved ones to Covid. This man is evil. https://t.co/Ap2dlviXz4

Mad Men star John Hamm has claimed Trump and Bill O’Reilly tried to “do that tall-dude thing, which is try to intimidate you,” at an S.N.L. after-party, which he quickly left.

In Plain Sight’s Mary McCormack responded to a social media user calling Trump incompetent by saying, “This is my favorite person on Twitter. Someday I’d like to buy her a drink.”

Far From Heaven’s Julianne Moore urged Americans to vote against Trump: “We can end this nightmare.”

Julianne Moore: “The worst thing that happened in 2017 was the election of Donald Trump. The best thing was that a lot of other people felt the same way.” #CNNNYE pic.twitter.com/p7pVcGyW7A

This Is Us actress Mandy Moore called Trump “the cruelest” for telling Americans not to be afraid of COVID.

SVU’s Mariska Hargitay clapped back at the President’s Law & Order tweet with “You mean tyranny and racism!”

You mean tyranny and racism! https://t.co/39AUhgKxe7

The West Wing’s Allison Janney has claimed, “Trump has divided America like it was in the Civil War.”

Who cares what those brain dead idiots think, their only acting achievement is actually a failed attempt to act human!

They are so ignorant it is unbelievable. let’s see, biden promises to raise taxes by 70%, there goes their money. Do they not know what socialism is, I don’t think so, again they will suffer when their money and everything else they hold dear is gone.

It’s amusing how these “heavyweights” can judge Trumps behavior and none to judge their behavior. What say should they have on when and if Trump is appearing on a town hall meeting!

Why does Hollywood think anyone cares what they think! Mostly we always go opposite! You all need to get over your thinking you are important to anyone! You made yourselves hated! Go get some body work done! Ugh!!!!!

The simple truth is that the commission breached its contract by altering the terms unilaterally. That warranted rescission by Trump. As far as Hollywood is concerned, no one cares about what these vacuous line readers have to say.

Who are these people? Never heard of ANY of them.

New age morons who think that what they have to say is important.
Important only to the likes of the same minded haters.

I’ve heard of most of them. They are paid big bucks for pretending to be something they are not so why should I pay attention? If Joe and the Ho win, I hope they tax these rich clowns into bankruptcy.

who cares what these worthless script readers want

Who the hell are these people anyway? I only recognize 2 of them, what’s makes them so special that they think someone cares about their opinions…nope I don’t! And won’t watch you anymore either

When Biden, Harris, the Democrats/Leftists/Liberals/Socialists say that they are going to raise taxes on the Rich, don’t these idiots realize that they are the Rich that will be paying for all of the Free Stuff that is being promised. Now I realize that none of these promises will be kept but the point remains when the tax burden is shifted to the Rich it will be their Taxes that will be raised. As for that one clown wanting to moderate the next debate, the only way this could be done is if someone else wrote an entire script with not lone all of the questions to ask but would also need to include any witty comments and adlibs, and then gave her a week to study and rehearse. These people live in their own little bubble so detached from the real world that I think that they really believe that they are Special.

You can only tax the rich so much. They have the option to take their money elsewhere.

All you hollywood pea brains is take a good look at your ratings for the oscars and that should give you a clue about how people feel about your kind.

Raise you hand if you give a furry, fat, rat’s butt about these brain dead, DemoRat – ‘ENTERTAINERS’. LOL!!! 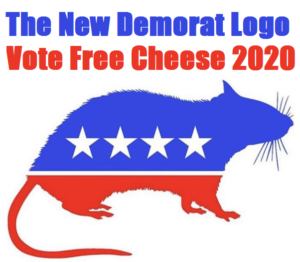