New Twitter CEO Elon Musk went after Jack Sweeney, a college student and programmer whose been tracking Musk’s private jet for years. Sweeney doesn’t only keep the whereabouts of Musk by tracking the flights and location of his jet, but also publicly updates his Twitter following.

Musk, after multiple requests and offers to Sweeney for him to stop publicly posting about his movements, has finally put his foot down. Musk banned the Twitter account @ElonJet. 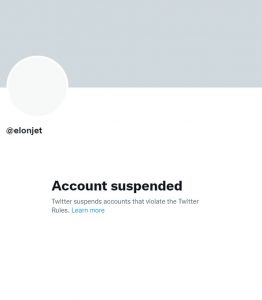 Musk rationalized his decision amid outrage by saying, “Criticizing me all day long is totally fine, but doxxing my real-time location and endangering my family is not”

Criticizing me all day long is totally fine, but doxxing my real-time location and endangering my family is not

Many took issue with Musk’s decision to ban the account due to his previously reported policies surrounding free speech, however, doxxing and publicly tracking, in Musk’s view, is not free speech.

Musk only suspended the account for seven days, and added that real-time updates of his or anyone else’s locations are not allowed.

The media has taken the stance that Musk is in the wrong for his decision, however, one could only assume their reaction if a journalist was digitally stalked and potentially millions of Twitter users could track them in real-time. Of course, when you consider the average citizen, the danger of real-time updates on someone’s location without their consent becomes clear and obvious.