Epstein and Maxwell reportedly received a special tour through the Clinton White House after they donated £7,280 to the refurbishment of the oval office.

A British tabloid published new photographs late on Saturday night of Jeffrey Epstein and Ghislaine Maxwell visiting then-President Bill Clinton, a Democrat, inside the White House during a VIP reception for those who contributed money toward refurbishing the Oval Office.

Epstein and Maxwell “toured Clinton toured Clinton’s residence and the East Room during a reception after Epstein gave £7,280 to the refurbishment of the Oval Office,” The Sun reported. “The White House reception — hosted by both Clinton and wife Hillary — was for people who contributed towards the £290,000 renovation via the White House Historical Association.”

In this one, Bill Clinton has that “I’m probably going to have you killed one day” look on his face. pic.twitter.com/yGlSqUAvdc

Hell is never closed and enlarges itself daily. If Epstein is dead, he found this out already. Time is short, no one should envy these evil people their greedy, sinful lives. The money they steal will be like fire to their flesh, and the innumerable people, especially children, they have hurt and/or killed will also be poured out on them in the form of everlasting torment, pain, and suffering. They made the wrong decision to follow Satan. Jesus Christ of Nazareth is the only Way of salvation and His gospel changes hearts. Hopefully Clinton will hear the gospel and turn from his wicked ways!

Clinton’s daughter is also a big part of the ‘trafficking ‘ bunch.
SMH what a way to raise your daughter eh Bullard
..hehe

Uhhh, WHO would pay to have sex with Chelsea Hubbard Clinton?

Ran into BILL CLINTON in fall of 1991 at OSU UNION lawn,Columbus, Ohio. Literally!! he body slammed me and the camera sudden took the photo!! Of course with his mouth open. 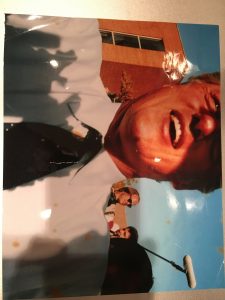 As yes, the Democratic Party! The Party of pedophiles, perverts, the sexually dysfunctional, abusers, rapists and thieves.

Otherwise known as the Occult.

The Clint-Ons should ALL be in jail.
And, there’s countless others from the party of unity (KKKRAKAS) that should be joining them.

The globalist elite chose them to be in power, but patriots behind Trump have rejected them and their ungodly, genocidal ilk!

I’m very skeptical about his death, it’s nothing for these people involved to blackmail, or deceive each other, this is as low as it gets, sex with children is sickening and that’s what these rodents were doing, and HRC thinks she is somebody special.

Yea and I’ll bet the words spoken to Epstein by Clinton, “Sign me up Coach”.