Rep. Jason Chaffetz is taking a page from President Donald Trump and using Rosie O’Donnell to help him raise money.

In a campaign fundraising email sent out Monday, Chaffetz said liberals are trying to make him their latest target.“Rosie O’Donnell, (yes, Rosie O’Donnell) just maxed out to my Democrat opponent and is tweeting to all of her liberal followers to do the same,” the email reads. “I need your help to fight back.” 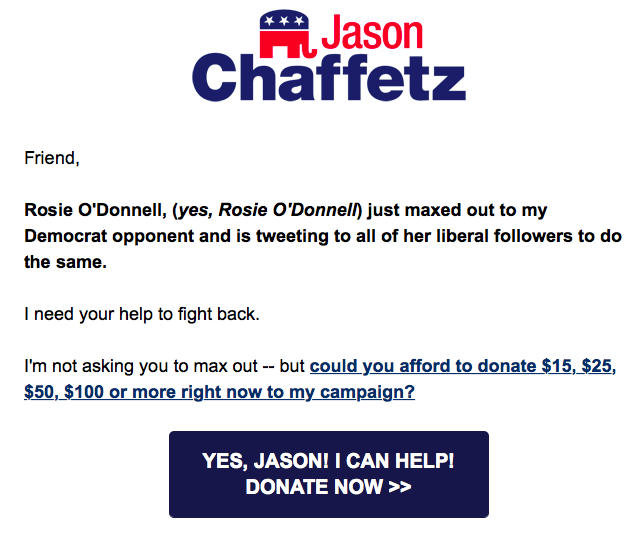 Last week, Kathryn Allen, Chaffetz’s Democratic opponent, claimed that she had raised $35,000 in 24 hours after Chaffetz made comments saying some low-income people would have to choose between health care coverage and a new iPhone. In response, O’Donnell tweeted that she had maxed out in donating to Allen.

O’Donnell responded on Twitter by saying “people are onto you.”- See more at: http://www.rollcall.com/news/chaffetz-uses-rosie-odonnell-for-fundraising#sthash.oFe2KtEX.dpuf

so @jasoninthehouse is gonna SCARE all of UTAH – with 55 year old me – jason – people are onto you – fear the truth jason – own ur actions pic.twitter.com/MgWGIr0ENa