Early Wednesday morning, a computer outage led to all domestic flights being grounded.

The Timetable
At 8:12am ET there were 3,578 flight delays within, in and out of United States. There were 450 flight cancellations.

By 9am ET, it was expected for flights to resume departures from these points.

However, the FAA has ordered all flights to HALT departures amid growing problems with the system outage.

Stay updated on these numbers by visiting Flight Aware.

According to Fox News:
The outage comes as a result of the failure of the FAA’s NOTAM (Notice to Air Missions) system, which alerts pilots and other personnel about airborne issues and other delays at airports across the country.
“The NOTAM outage continued with no current estimated time of restoration,” the FAA website stated Wednesday morning.
“The FAA is working to restore its Notice to Air Missions System. We are performing final validation checks and repopulating the system now,” the FAA said

“While some functions are beginning to come back online, National Airspace System operations remain limited,” the statement continued. Most airlines had already chosen to ground their own craft due to the system’s failure early Wednesday. The failure has so far resulted in some 400 canceled flights across the U.S., according to FlightAware. The tracker also showed that more than 1,150 flights within, into or out of the U.S. were delayed. United Airlines announced its decision to ground all of its aircraft until 10 a.m. ET due to the outage. 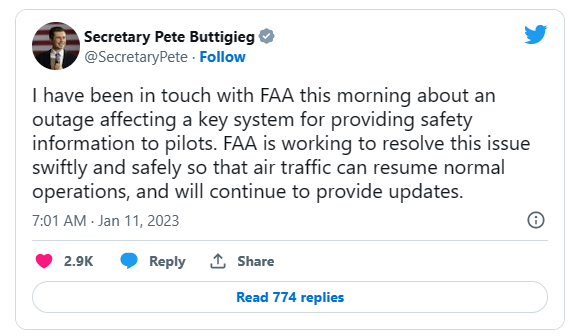 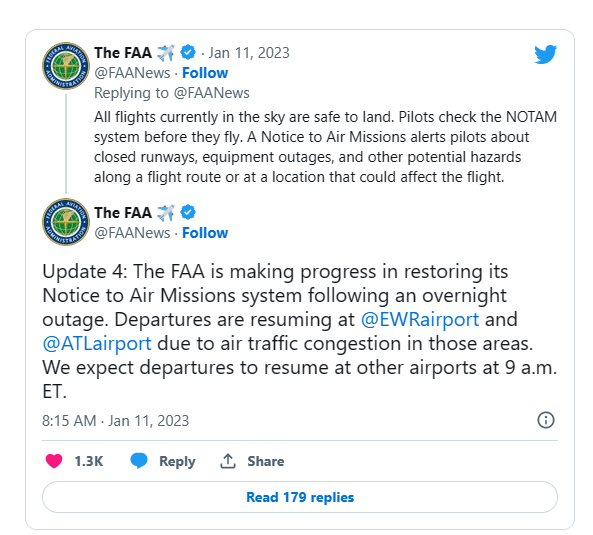 Update 5: Normal air traffic operations are resuming gradually across the U.S. following an overnight outage to the Notice to Air Missions system that provides safety info to flight crews. The ground stop has been lifted.

We continue to look into the cause of the initial problem

President Biden told reporters on Wednesday morning that he had spoken with Transportation Secretary Pete Buttigieg about the outage and asked that he “report directly to me when they find out” the cause. “Aircraft can still land safely, just not take off right now. They don’t know what the cause of it is, they expect in a couple of hours they’ll have a good sense of what caused it and will respond at that time,” Biden said. White House press secretary Karine Jean-Pierre tweeted Wednesday that there was “no evidence of a cyberattack at this point.” The ground stop would allow the FAA “to validate the integrity of flight and safety information,” it said.

I make over thirty k a month working part-time.. d10 I kept hearing from other people telling me how much money they could make online, so I decided to find out. hjk Well, it was all true and it completely changed my life.
…
This is where I started.….handsomeincome1.pages.dev

I’ve made so far this year working online and I’m a full time student. I’m using an online business opportunity I heard about and I’ve made such great money. It’s really user friendly and I’m just so happy that I found out about it. Here’s what I do.
.
.
For more details visit———————————➤ 𝒔𝒎𝒂𝒓𝒕𝒈𝒐𝒐𝒈𝒍𝒆24.𝒃𝒍𝒐𝒈𝒔𝒑𝒐𝒕.𝒄𝒐𝒎

I’ve made so far this year working online and I’m a full time student. I’m using an online business opportunity I heard about and I’ve made such great money. It’s really user friendly and I’m just so happy that I found out about it. Here’s what I do.
.
.
For more details visit———————————➤ shiny.link/zpClgA