Following Kanye’s remarks that many on the left have considered “anti-Semitic”, Klein, who previously advocated for someone bombing an NRA convention, now hopes that if another holocaust were to occur, Ben Shapiro would be the first to fall victim.

Klein, who is Jewish himself, regularly falls back on calling things anti-Semitic, however, he considered the circumstances different if he’s the one making the jokes. The left-wing icon, Klein, runs a YouTube account and podcast, “H3H3”. Many have since taken to Twitter and social media to call out Klein’s distasteful comments.

“If there’s another Holocaust and people start rounding up the Jews again I hope Ben [Shapiro] gets gassed first. Or last,” Youtuber Ethan Klein said on his H3TV podcast on Monday during a discussion on Kanye West’s recent antisemitic rants and other political controversies. 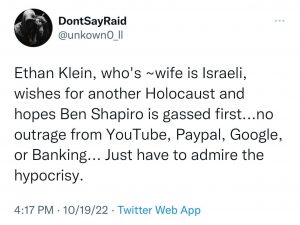 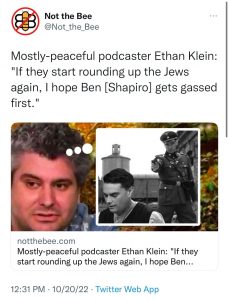 If there were another Holocaust, I would hope that Ethan and his family escaped. But maybe that’s just me.

Klein’s employees and co-hosts looked visibly disturbed by the comment. Klein had hesitated before making the joke, remarking prior that it would be controversial.

“Can I not say that?” Klein, who is also Jewish, said to his podcast staff. “I’m not doing anything. I’m getting gassed too. Do you think it would be more justice if he got first or last?”
Klein attacked Shapiro because the pundit’s Daily Wire outlet employs political commentator Candace Owens, who the Youtuber said had taught West his antisemitic rhetoric.

“Candace Owens also works for the Daily Wire, and he’s [West] apparently getting all this fun antisemitism from her it seems like, and they just love it,” said Klein.

Klein attempted to appease his coworkers’ concerns by reminding his audience “I am Jewish by the way. Just putting that out there. 99.7% Ashkenazi Jew, B***H. No one can even step to me. I’m the king of the Jews. Jesus ain’t no king, I’m the king. You’re afraid of gas? I was born in the gas,” a play on a line by the character Bane from the Batman movie The Dark Knight Rises.

Klein met his wife Hila, who is Israeli, at the Yad Vashem Holocaust memorial when Ethan was on a Birthright trip and Hila was serving in the IDF.
The podcast has seen its share of controversy besides the recent remark about Shapiro.
Five months ago Klein said on a podcast episode that “someone should bomb” the building hosting an NRA convention in Florida.

H3H3’s Ethan Klein has sparked many controversies. While his podcast is nothing special, and widely mirrors points made by mainstream media television news, his audience is young and enjoys his humor. Due to his young audience and he has develops a large following that will side with him no matter what.

Worse than his large and dedicated audience is the protection he gets. While alt-right and other fringe YouTubers are removed almost immediately from the platform, Klein is protected, and never threatened with the removal of his channel – despite regularly making comments much worse than the fringe right-wing YouTubers.