Pop sensation Taylor Swift announced that her pick for President on Wednesday during an interview with V Magazine.

She announced that she would be supporting Democrat candidate Joe Biden. Swift claimed that Biden was the best choice for women, minorities and the LGBT community.

Taylor Swift made Joe Biden “The 1” on Wednesday when she announced her support for the Democratic presidential candidate.

What about the rest of America, near 86% don’t fit in your categories.

My immediate thought was “Who was good for America”.

Yes Biden supports women . By holding on to them while sniffing their hair .

Morons for sure, they don’t live in the real world so what do they care if Biden ruins it. Glad your job is secure…oh maybe it won’t be…now that would be funny!

She is misinformed to say the least.

No, she is just stupid!

that little girl is a dumb ass! She has zero clue about the state of affairs that would come under a biden harris administration!!! For one, She can eat her dog instead of walking it!!!

I must say, who cares what the liberal Hollywood people think? NO ONE CARES!!!

i don’t listen or watch her anyway! The Hollywood people don’t have a brain anyway! And they forget where do they get their money from!

What a twit! Who cares what she thinks. Keep your political opinions to yourself!

If she had a brain her opinion might count but hers all come from her arse .

Once again proving her poor choice in picking men….

Clickbait. How is this “surprising”???

Swift cute but not too smart

She gives “cute” a bad name!

Not that it makes a single difference to you coffers or mind, but you just lost the admiration of country followers who built you to who you are today. I will change my listening devices and purchasing of music for all my 16 grands to leave you behind with the rest of the riff raff you support

Bullshit!! This is no surprise. She may not be a Socialist but she’s been a liberal for a long time.

Shut up and sing.

Who is Taylor Swift?

Wasn’t he on that horrible American Idol show way back?

But she votes, did you?

Another illiterate elite, who cares about her ignorant political opinions.

No big surprise given that she’s made a living writing songs about her shitty taste in men.

I think we are safe as long as they don’t allow 13 year olds to vote.

Taylor Swift is now, and has always been, an idiot.

Taylor unswift doesn’t know her a.. from a hole in the ground. Who would care who she votes for (if she even knows how to vote)Remember the voting sheets don’t have notes to look at.

Of course she did and seriously, who cares?

That twit is swift in name only!

I believe you spelled that wrong, should be an “a’ instead of an “i” in twit.

A total moron, who obviously will look forward to paying a shitload more taxes!!

Who cares who Taylor is voting for !?!

Basketball rating are down because people are sick of black lives matter. Stop supporting Hollywood and lefties like Taylor Swift, maybe they will lose fans and learn that we don’t give a damn about their political views.

No surprise at all about Taylor “Jezebel” Swift 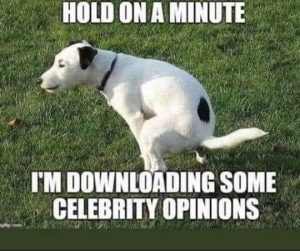 The good news here is that most of her followers are too young to vote, so while she has influence over many, she won’t cause much damage.

Most of her young libby snow flake followers will be filling out the 80,000,000 unaccountable mail in ballots .

what healing process the one the DEMONrats brought forth?

Surprise?…who else would this TDS scum bag vote for? Another deranged loser who sold her soul to the devil for popularity now and an eternity of all hell has to offer

She just lost at least half her fans. Why do these people keep injecting themselves into politics? No matter who they “endorse” they are going to lose half their audience.

because she is greedy for globalist puppet $oro$ bribes for her to preach all the globalist agendas .

She doesn’t care that the Demo. are turning this country in communism. What an idiot.

another uneducated rich liberal…. lol at anyone paying attention

These poor young people don’t have a clue how they are begging to live under a tyrannical system that will certainly take her wealth and place her under constant surveillance and demand utmost allegiance to the ‘Party’ ( not the kind she is use to) as surly as she hust lost thousands and thousands of fans.

That whistling you hear is the wind blowing into her left ear and coming out of her right ear.

it’s obvious the idiot Taylor swift isn’t really too swift but knows if she needs some publicity and she does all she needs to do is what all the other washed up people in the entertaining field are doing say bad things about trump and admitting your voting for a pedophile like creepy joe to be your president only displays the type of person you really are. sniffing groupy joe belongs in an asylum not the white house. or just leave him in his basement and throw away the key. and don’t worry about heels up kamala she will find another politician to sleep with it’s what she is.

A lot of young entertainers who are taken under the wings of the industry giants and propelled towards stardom wind up corrupted by those surrounding them. They become “useful idiots” of the radical leftists environment they are confined to. Taylor, and Miley are prime examples of the corrupting influence of radical handlers.
It’s like wrestling with pigs, you can’t do it without getting dirty.

So another left wing pinko celebrity endorsed a democrat. Why is that a surprise?

Swift has made her millions, and like 98% of Hollywood and the entertainment industry, she’s all for abortion on demand, sodomites, an$ All the other deviations from the will of GOD!

This was surprising? No, endorsing Trump who actually did something good for rhis country over the last 3.5 yeara wouls have been surprising. This just verifies yet again that “celebrities” are incredibly stupid but think someone cares about their opinion

Hollywood people just don’t have the brains to do or
say smart things. Biden is horrible as is Harris. Don’t
like America, then get the hell out!

Hey Taylor, just sing you songs. We don’t care what your political opinions are so………………just sing.

Oh, so disappointed in her because I thought she was grown up but she got famous too fast, thinks it’s easy. Other singers put in 30, 40 years before they get famous enough to have a million dollar home. 99% of singers never make it no matter how good they are. She doesn’t get it, she was the teanie bopper of the moment at the right time with the right innocent looks. She has no concept of working your butt off for years and still just making the bills barely. That’s why she thinks the democrats aren’t practicing communism or maybe she does get the democrats are practicing communism.