These pet owners fought off wild animals to protect their pups from apex predators.  Plus firefighters save a dog on thin ice, and a lost dog miraculously finds her family, and one good boy saves his owner after an accident.

Buddy vs. the bear

A California man punched a 350-pound black bear in the face when he caught it attempting to drag his rescue pit bull Buddy out of his yard by the head. He repeatedly jabbed the bear in the face until it dropped Buddy from its jaws.

A man’s love for man’s best friend is a powerful force. Kaleb Benham from Grass Valley took on a 350 pound bear that was attacking his rescue dog, “Buddy.” Kaleb said he heard a growl the saw the bear dragging buddy “by his head.” So he tackled the bear and punched it pic.twitter.com/XAhTrS2AEC

Buddy is recuperating from three-hour, life saving surgery. The bear has returned the man’s property several times after the beatdown. He’s unsure how to keep the bear from coming back.

Buddy’s face was severely damaged. His ears had to be stapled back on. But he’s recovering! Kaleb and Buddy spent Thanksgiving laying in bed resting, but they’re more thankful than ever. Photo of Buddy as Kaleb watched from outside the operating room ⬇️ pic.twitter.com/T8IhDjkvLs

Gunner vs. the gator

A Florida man saved his three-month-old Cavalier King Charles spaniel from the jaws of an opportunistic alligator, who dragged the pup into a pond next to their home.

My man saved his puppy from an alligator and kept smoking his cigar! pic.twitter.com/57s5x3U13Q

When a four-foot alligator pulled Gunner the puppy into the water, Richard Wilbanks jumped into the pond after it and pried the alligator’s jaws open. After a few days in the hospital, Gunner was released and is now inseparable from his savior.

@90DayGays @carls_real
I think I found the real life Carl and Carl's wife. He saved his dog "Shooter"…uh I mean "Gunner" from an Alligator with out dropping his cigar!! ❤❤ #90DayGays #Carrrrll ? pic.twitter.com/ZtGdrWoAfG

North Dakota Firefighters dramatically rescued a Chocolate lab stranded on a chunk of ice floating down the Sheyenne River. Lola, who escaped from home, has been happily reunited with her owner.

When Jasper, a German Shepherd mix, was attacked by a python in the backyard, his owner grabbed the snake and spun it around until the puppy was released from its death coil.

A golden retriever mix was abandoned on a bench in Mexico after the owner left a note that their family had been physically abusing the dog.

The sweet pup was taken in by a local animal rescue and will be up for adoption soon.

One who returned home

An Alabama rescue dog disappeared in early November after escaping her leash and collar, but weeks later, she showed up to Walmart, where she searched the aisles until finding owner June Rountree, who works as a cashier at the store.

And one that saved his owner

After a 78-year-old man crashed his car, an off-duty police officer found the man’s dog Petie wandering in the woods, who then led him to his owner’s location for the rescue.

Dogs are Miracles with Paws !
My 17 year old Pit Bull “ Rocky Dan” was my best friend, my Homeland security, he protected the farm and was the smartest dog ever and I miss him every single day ! 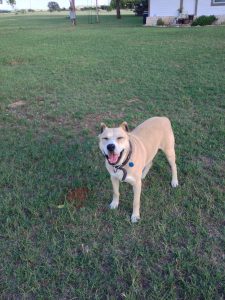 Dogs are awesome and so are some of their owners,

I tell you what. That 350 pound black bear would be buzzard bait if he came back to my property, after attacking a member of my family.