Raphael Warnock was arrested in 2002 for covering up child abuse at a Baltimore summer camp. Warnock and Mark Wainwright, were accused of obstructing an abuse probe when they tried to prevent a state trooper from interviewing camp counselors. Warnock refuses to answer questions surrounding the summer camp in recent years, and many are unaware that the summer camp is proven to have had abuse and health violations. Many media outlets haven’t covered the story in detail since 2002.

A camper in the 2002 Camp Farthest Out in Carroll Country, Anthony Washington, now 30 years old, described the abuse he endured at the summer camp run by Rev. Raphael Warnock.

Washington was 12 when he was sent to the camp, which served inner-city children from Baltimore. He told the outlet that after wetting his bed one evening, he was forced to sleep outside without a pillow, blanket or anything else to keep him warm.

“[The counselors] wouldn’t let me in the house, not at all,” he told the Free Beacon. “Shut the door to the cabin, locked it.”

“It was dark,” Washington recalled, noting that there was nothing outside besides a nearby basketball court.

Counselors also threw urine on him that was left in a bucket used when they didn’t have access to a bathroom.
Washington further alleged seeing counselors “grab kids,” but couldn’t speak to any accusations of abuse beyond that, only adding that he feared for himself and his sister.

Campers were prohibited from calling their parents, he told the outlet. Once Washington was eventually able to get his mother on the phone, she went to court.

That same year, Warnock, then 33, was taken away in handcuffs after interrupting a police interview with a camp counselor about possible instances of abuse.

Still, the August 2002 incident did not result in charges being pressed, and law enforcement later called what occurred “a miscommunication.”

“What we decided was there was some miscommunication that had occurred with them. They were very helpful with the continued investigation. It would not have been a prudent use of resources to have prosecuted them,” then-Deputy State’s Attorney Tracy Gilmore told the Baltimore Sun in November of that year.

The abuse of children at Warnock’s summer camp and his lack of remorse from him are concerning. Either he was aware of the abuse, or, he was extremely incompetent and unaware. What Washington was forced to endure while being under the supervision of Warnock is troubling, but even more concerning, Washington is the only victim to have been interviewed publicly.

If only one victim came forward, how many victims could there have been at Warnock’s summer camp?

Maryland Department of Health and Mental Hygiene caught wind of this story. The department found and documented 11 health violations that occurred at Warnock’s summer camp:

According to the Daily Caller:

A 2002 report obtained by the Free Beacon from the Maryland Department of Health and Mental Hygiene listed 11 violations at the camp, including incomplete camper medical records, not having approval for plumbing and electrical systems, improper child abuse reporting systems, not having approval from the state fire marshal and failure to properly supervise the children.

Allegations of Domestic Abuse and neglecting his children (2020)

In March of 2020, the now ex-wife of Raphael Warnock alleged that Warnock ran over her foot. In the bodycam footage, Warnock’s ex-wife said:

“He knew, trust me he knew. This man is running for United States Senate and all he cares about right now is his reputation” adding, “I’ve been very quiet about the way that he is for the sake of my kids and his reputation.”

This allegation comes in the midst of their divorce proceedings.

Following this allegation, Warnock is also being alleged in court to have neglected their children.

According to The Washington Free Beacon:

Georgia Democratic senator Raphael Warnock has been ordered to attend mediation for a custody dispute with his ex-wife, after she accused him of neglecting visitation with their two young children and failing to pay childcare expenses.

Fulton County Superior Court judge Shermela J. Williams said on Friday that there were “numerous unresolved issues” between Warnock and his ex-wife Oulèye Ndoye, and ordered the couple to try to reach a mediated settlement by May 7. A status hearing in the case was also scheduled for May 16, with both Warnock and Ndoye required to attend, according to a notice from the judge on Monday.

In a court filing in February, Ndoye accused Warnock of leaving her “financially strapped” by refusing to reimburse her for childcare expenses. She said Warnock also “routinely neglects” to give her notice when he is traveling out of town during his visitation days, and instead has the children “picked up from school by friends and [leaves] them with various babysitters overnight” while he is away. 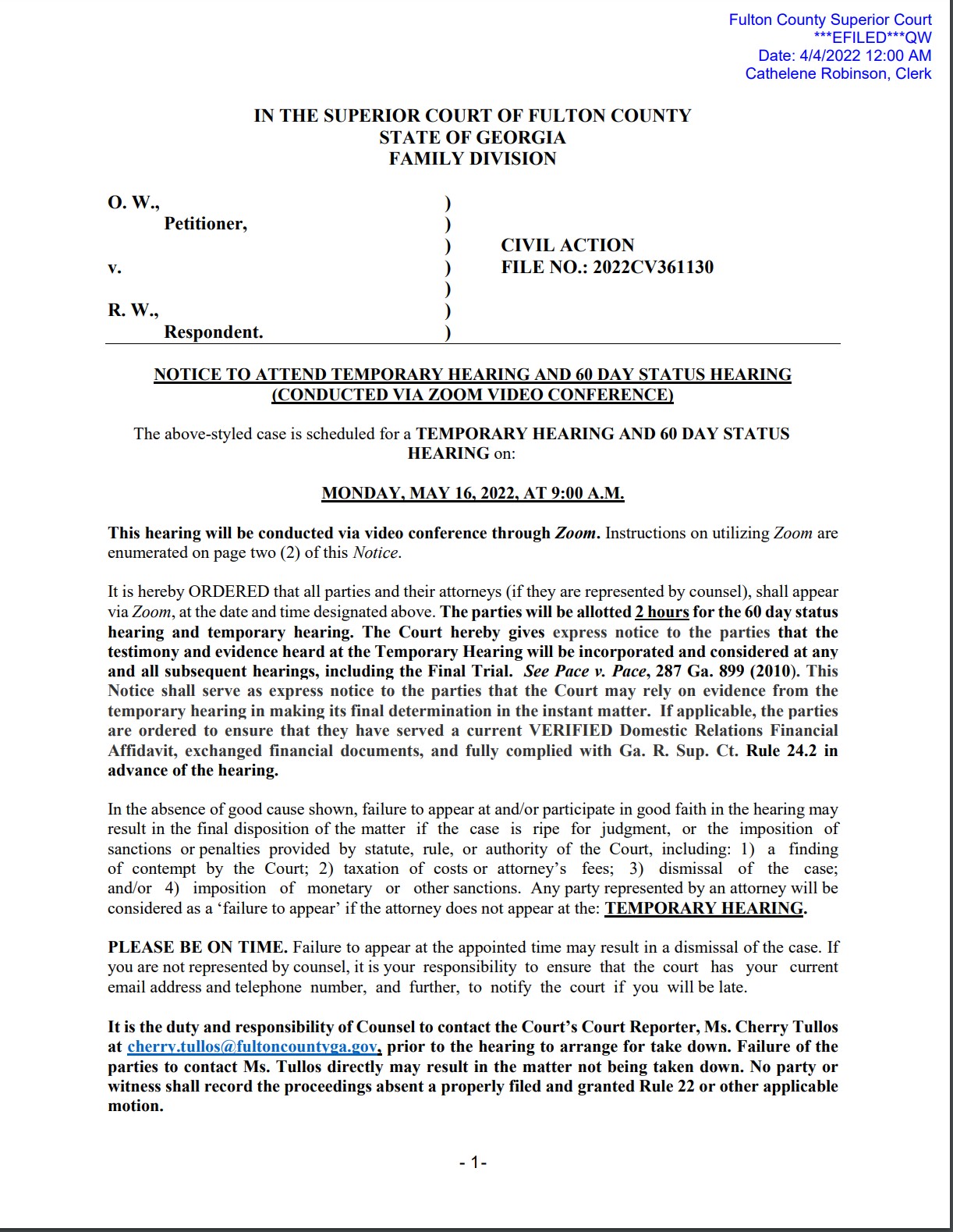 Warnock’s ex-wife, Ndoye, has also had to request the court to increase the amount of child support for Warnock to pay since his income has gone up in recent years.

Warnock served as a youth pastor for six years, then assistant pastor for four years to Rev. Calvin O. Butts at Abyssinian Baptist Church in New York City. During that time, from 1991 to 1998, Butts’ Abyssinian church hosted Leonard Jeffries, the uncle of Democratic Rep. Hakeem Jeffries, who is poised to succeed Nancy Pelosi as the next Democratic leader in the House.

Leonard Jeffries, a Black supremacist and former Black studies department chair at City University of New York (CUNY), publicly stated views include theories that Jewish people were responsible for as well as facilitated the Trans-Atlantic slave trade. Jeffries, the welcomed guest of Warnock’s church, also is a Black supremacist, stating that he believed that Black people are inherently superior to White people due to their pigmentation.