According to the New York Times, and multiple other outlets, the police badge that Herschel Walker flashed during the Georgia Senate debate was not a fake badge in the sense of it being a legitimate law enforcement badge, however, it was an honorary sheriff’s badge, something that celebrities and outstanding members of the community can receive.

Neil Warren, who was a Cobb County sheriff at the time he gave Herschel Walker an honorary deputy sheriff badge and duties said in a statement at the time,

“(Herschel Walker partnered with the Cobb County Sheriff’s Office for over 15 years” and “led trainings on leadership, advocated for mental health, encouraged countless officers, and was always there to lend a hand whenever we needed him.” 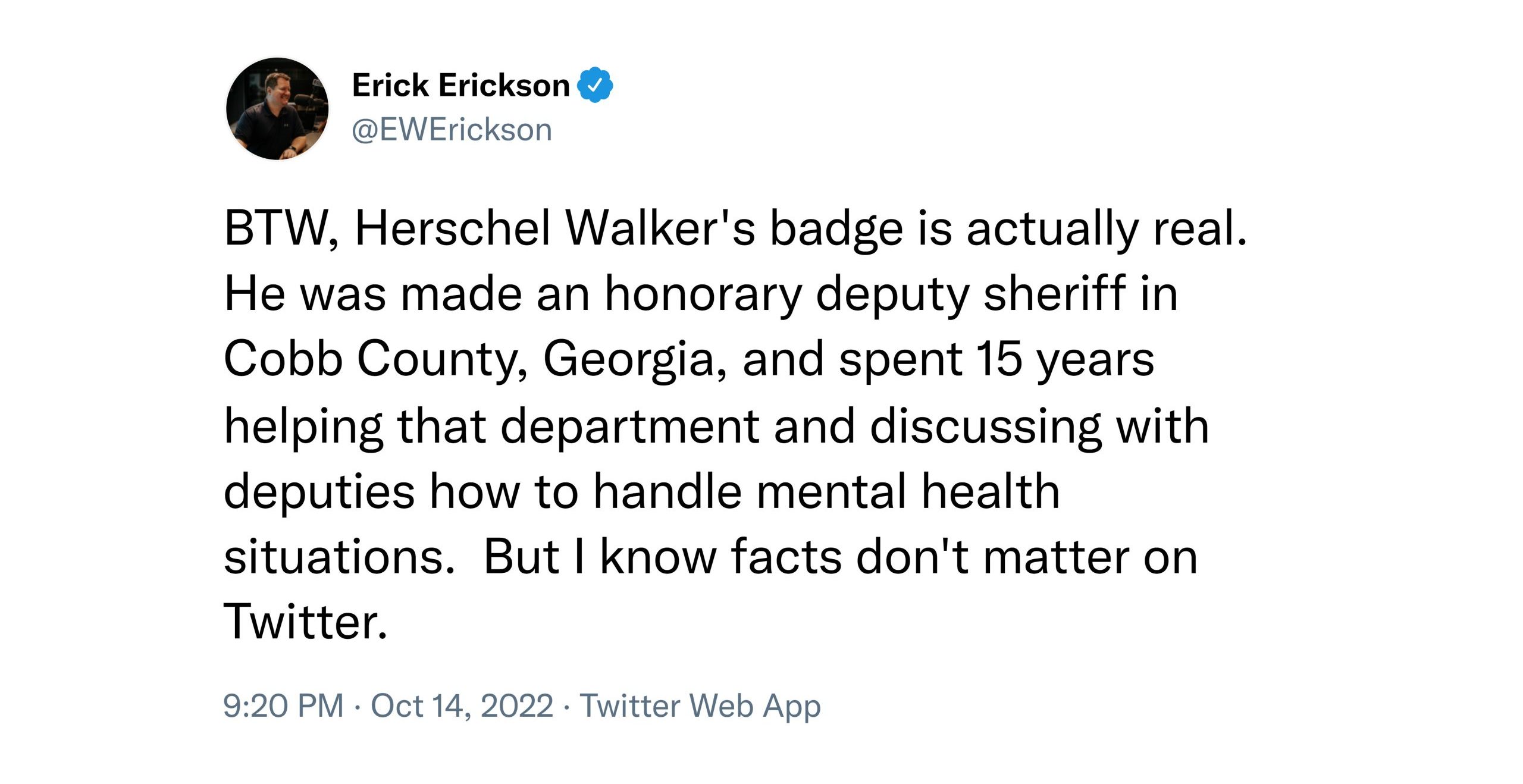 Similar to Elvis Presley in meeting Richard Nixon in 1970, Nixon granted Elvis a DEA (Drug Enforcement Agency) badge, along with naming him as a Federal Narcotics Agent. Of course, this was honorary, and very few people confuse this with Elivs actually conducting federal investigations into drug-related crimes.

Walker’s police badge shows a tie with the local community and their law enforcement – it was not an attempt to make people believe that he was an active police officer.

According to the New York Times,

(It seems likely that Mr. Walker and the moderator attached different meanings to the idea of a prop. She was apparently saying that items used for demonstrations were not allowed; she was not referring to the validity of the badge.)

When Mr. Wilkins was sworn in, a sheriff’s spokeswoman noted to The Cobb County Courier that Mr. Wilkins did not have the same authority as a regular deputy sheriff to carry a weapon and arrest people. She characterized his role as being a liaison and partner.

The media is attempting to make a Mike Pence fly-on-head situation out of Herschel Walker’s honorary police badge. If they can’t get Walker on a gaffe in his debate, then they’ll attempt to get him for something else.

The former NFL star performed well in his debate, and had little to no mistakes. Many on the left banked on Walker having issues keeping up with the more politically experienced Warnock. However, Walker came out strong, and Warnock was criticized for frequently dodging questions.

Herschel Walker’s choice to bring out an honorary sheriff’s badge is more of a badge of honor than it is a badge that carries any authority. However, Walker never claimed he was ever an active police officer. His ties to the community and assistance in the local police department should be the headlines of the stories, not his “fake badge” which was given to him for his choice to assist the Cobb County sheriff’s department. When Walker flashed the honorary police badge he said he “worked with many police officers”, which is a far cry from claiming he served as an active police officer.

Well Shaq loves to ride with the cops …with his honorary badge.

Shaq also has an honorary badge.. and loves to ride with the cops.